The Webmeister Drives a Three-Wheeler 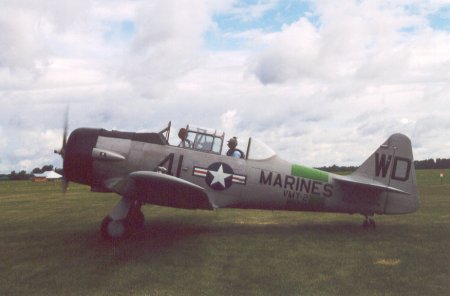 Yep, that is your Webmeister in the front seat. Besides being a BMW rider for many years (and a computer geek), I have been an aviation enthusiast as well, specifically for World War II warbirds.

Well, recently for a major birthday, my loving spouse presented me with one of the nicest presents ever — a full hour in this AT-6 Texan

1 (which is actually older than me). The flight included full aerobatics, a video of the entire flight from three cameras, and I had control of the aircraft for almost all of the hour. Number 41 is a 600 horsepower version.

It was even more fun than an R1100S on a curvy back road. At 10,000 feet, you can fly upside-down. We did almost all of the BACM (Basic Air Combat Maneuvers), including rolls, loops, Immelmanns, Split-Ses, Cuban-8s, reverse Cuban-8s, snap rolls, and hammerhead stalls. From the seat of your BMW motorcycle, you don't ever want to look UP and see the Earth!

Being a non-pilot, I studied beforehand. I was already familiar with what I needed to do - just lacked the experience. There was a time long ago where I really did do some flying. There is only one maneuver I have never done - a landing.

Based in Kissimmee, Florida, Warbird Adventures

(turn up your speakers!) comes to Geneseo Airport for the month of July. Perhaps you would like to join me next year...

about flying the AT-6. The article contains numerous pictures and may take awhile to load.

Addendum 19 Sep 2011: it appears Number 41 has been retired. I found this photo by Jason Grant:
SNJ 41 Retired and static

Copyright © 1997-2021 Finger Lakes BMW Club.
Contact us with your comments if you wish.
It's Thursday the 28th of October at 6:32 in the
Finger Lakes. Do you know where your BMW is?
Finger Lakes is on Facebook!